Around 1937/1938 the band were asked to play at a garden fete at ‘Wadeton Court’ by a well known person namely Sir Hugh Goodson. The band were very pleased because this was then a prestigious occasion. After the fete Sir Hugh presented the band with a sizeable cheque which was to go towards new uniforms. 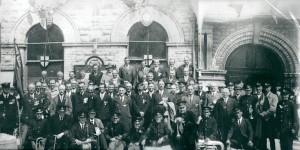 After this came the Second World War when many of the band were called up to the forces and the instruments were put in store.After the War and De-mob the surviving members got together again. I am told by the ex secretary‘s son Mr Billy Kikkie that the restart of the band was decided in a room at the back of the Blue Anchor Pub at the bottom of Fore Street.

So the Brixham British Legion Band was reformed in 1947. We still have a copy of the rules which were drawn up and also copies of the Minutes of every AGM since 1947.
In 1996 we celebrated 50 years since restarting the band. Unfortunately the Minutes of the Bands meeting prior to the war years were either discarded or lost.
Between 1947 and 1948 the band began giving Summer concerts at the Quay side under the Fish Market. The market in those days had a corrugated iron roof with steel posts supporting it. Between the posts hung tarpaulin curtains which could be drawn across in bad weather and there were fish stores at each end of the market. Our local band supporters used to sit on the fish boxes during the concerts and there was always the smell of fish.

ln 1948 the band were offered the use of a room at the lce Factory in King Street for rehearsals, also storage of instruments and music. At times it was very cold and members had to play with overcoats on, but afterwards some of the band would retire to the Maritime lnn nearby for a drink and warm up.

ln 1952 the band entered for the South West Brass Band Association Contest and were placed third being only two points behind the winners of the third section. A shield was presented to the band on this occasion.

Around this time Mr Eric Jordain, a prominent businessman and member of the band, owned a Morris Commercial Furniture Van in which the band used to ride in to many engagements. This would not be allowed nowadays. There weren’t many car owners in the band in those days and it saved a lot of expense of hiring a coach. Some time after this we invited a Mr Geddes of Burton Coaches to be Vice President. He was a good friend to the band and always gave a concession when hiring a coach and he did the same for many charities in the town.

Between 1945 and 1955 the bandmusical director was Mr Jock McManus a very efficient ex-military bandmaster but unfortunately he had to retire through ill health. He was succeeded by Mr George Halstaff a professional musician. During the summer of 1955 the band were asked to play on a pleasure boat, one of the Western Lady fleet owned then by Mr Ron Edhouse. Some of these ex navy MGBs are still in use today and during the summer months are used for the Brixham to Torquay ferry service and trips to the River Dart. One particular evening cruise was a great success. No one was sea sick, but several pieces of music were lost over board in the breeze. There was a bar on board so a good time was had by all.